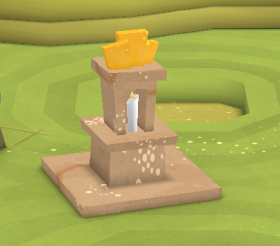 A close-up of a restored Shrine of Power

Shrines of Power grant a God Card that unlocks a God power when they are restored. To restore them, direct some Followers close to the Shrine and they will begin restoring it automatically, provided they don't engage in other tasks nearby.

Note that Shrines of Power appear nearly identical to Shrines of Expansion, but the latter grant Land Expansion cards that extend your influence instead of unlocking a power. The easiest way to tell the difference is hold down the right mouse button over these.