A Farming Settlement, One of the Many Build-able Settlements in Godus

Settlement is a god power that enables the player to compress all Abodes in an area into one big building. Belief can then be collected at one central point and space is freed up for more Abodes.

After the first one, further Settelment will cost more and more Belief points.

Clicking on the Large hand will reveal the Godus abilities tabs

Settlements are needed to advance your civilization. Creating settlements will produce specialty Followers that will help create special Resources you need to build new abodes.

Without settlements you would be unable to create any Resources such as Wheat or Ore.

Settlements are also good for preserving space in your Homeworld by having the buildings overlap on top of each other so you have more room to create more things in your world.

Settlements are found in the 'Settlements' tab in the bottom left corner of your screen. An option of six different collaboration types will appear, three are settlements, and three are villages.

Select the settlement you want from the list, after doing this a ring will appear in your homeworld. This ring is used to show which Abodes will be included in the settlement.

Clicking the preview button will show you how the settlement will appear after bunching the Abodes together. Clicking Squish it! will lock the Abodes in place.

Settlements can also be added to already existing settlements, just include the original settlement in you settlement ring during creation.

Doing this is a good way to have a very dense high population area, while taking up as little space as possible. There is a limit to this however. A notification appears informing the player that "This settlement has reached its maximum size. Try to create more space around it". Smaller abodes will yield a far greater population at max size than their larger counterparts. 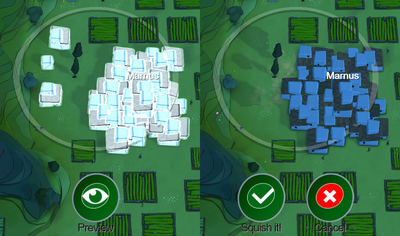 Settlements can also be Leashed to make the Specialty Worker travel greater distances.
The specialty followers pop cap per settlement is determined by the number of breeders. 1 special for every 10 breeders. Adding a Shine of Capacity will increase specialty capacity of settlements in its area of effect. 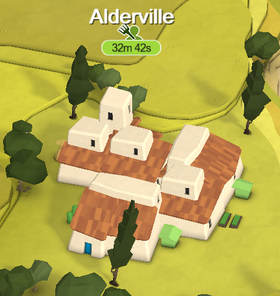 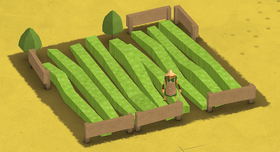 Farmers use fields to collect wheat

which can be used to collect Wheat

When a settlement is ready to send out a Farmer an icon will appear above the settlement that is similar to when an abode is able to construct on a nearby Plot.

Farming Settlements have a different icon; a green follower with a pitchfork. Clicking on the settlement will send out the Farmer. 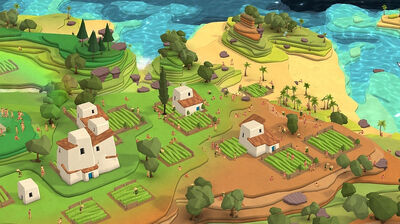 A farming settlement can help build a bolstering civilization. 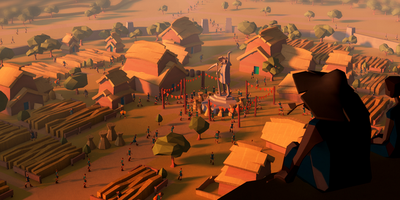 Concept art of a Farming Settlement. 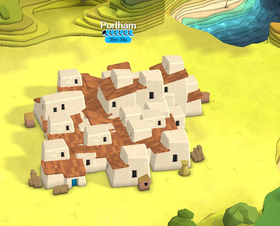 . Builder settlements allow Abodes to be conglomerated into a settlement and the resulting free space surrounding the settlement can be built up on and further compressed into a bigger Builder Settlement. 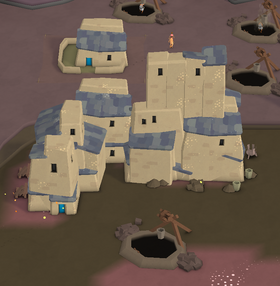 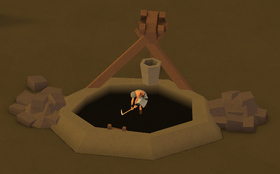 Miners use mines to collect ore

which can be used to collect Ore

When a settlement is ready to send out a Miner an icon will appear above the settlement that is similar to when an abode is able to construct on a nearby Plot.

Mining Settlements have a different icon; a grey follower with a pickaxe. Clicking on the settlement will send out the Miner. 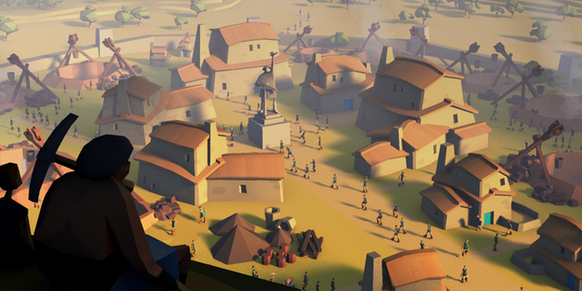 Concept art of a mining settlement 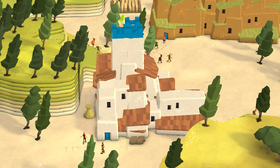 Prior to version 2.1, the Settlement god power placed a statue where Belief could be collected for a certain area and connected Abodes in that area via roads. It also allowed for Followers in the area to be be assigned one of three jobs: Breeder, Farmer, and Buffer.