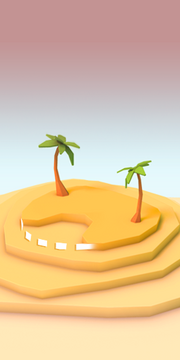 Sculpt The Land is the first god power available to the player, allowing reshaping of the land.

Click and drag the edges of plateaus to push and pull the land. This costs of belief.

In the higher stages of godus, land edges can be fine detailed by clicking the edge, and flicking the wrist in the desired direction, force applied affects thickness of layers being sculpted. Sculpting under sea level land cost the most belief.

It is unlocked by the Sculpt The Land god card. It does not require any stickers.

Click on a plateau and carefully drag outward to pull it out or drag it inward to push it in. At first, it will only be possible to move one plateau layer at a time.

The Smart Sculpting God Card acquired early in the game provides an alternate usage that is easier in many cases. By double-clicking the left button, a nearby plateau will be pulled over that spot, or if there is none nearby, one will appear on that spot. Double-clicking the left button pushes the uppermost plateau over that spot away, which creates a divot if this is not near the edge.

Acquiring the x3 Stronger Sculpting God Card allows the player to move up to three layers at a time by dragging.

Later into the game, players are able to unlock the x5 Stronger Sculpting God Card which enables players to drag up to five layers of land.

Prior to Godus 2.1 players the two sculpting advancements allowed players to move five and nine layers at a time but this feature has since been removed.

The amount of belief consumed depends on the distance, number of layers moved and height of the layers affected. There is no cost for sculpting the sandy layers.