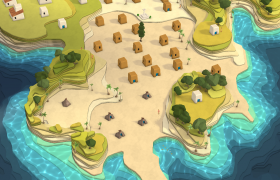 A developed portion of the starting area of your Homeworld. 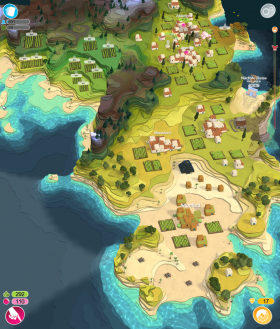 Then, Shrines are introduced to advance civilization faster, but makes the player's followers unhappier.

By the time the God Power card is obtained, players can now use God Powers, and others unlocked when on a certain statistic of a game. For instance, Beautify is unlocked when the player has 30 Farms.

Settlements are then introduced. It allows the player to squish together already-existing abodes, and allows those abodes to either produce builders, farmers, or miners, depending on the settlement selected. The same goes for Villages, but with much bigger radius.

Beacons of Expansion are required to increase the amount of land the player's followers can settle upon, otherwise known as Influence. Expansions usually introduce the player to special ready-made buildings, like the Voyage of Discovery, Astariville, and the PC exclusive, Pit of Doom. After one last expansion in the Homeworld, the player can allow their followers to repair the Astari's ruined Ark, and venture to Wayworld, with new features, but more challenging civilization.

As Developers stated the Homeland is sculpted to offer the player ideas in the some good ways to expand and also supplement the player's abodes and followers.