How do I get started?[edit | edit source]

The game will start automatically. When you see your first two Followers hitting rocks with pick axes, click on the rocks a few times to break them. With your small territory now clear, plots for the Followers to build Abodes on are automatically set up and they will start on their own.

At this point, your territory will be expanded. Use your Sculpt Land power, which you can select in the menu opened by clicking the pink block in the lower left to level more land for new plots. When you see flags raised at the Abodes, the Abode is full and a Follower will come out and explore if you click on the Abode, providing you have enough Belief. This is the number in the pink block at the lower left. Destroying rocks and trees will give you more Belief if you need it.

Wait, I can't save or start over?[edit | edit source]

Once you break the first two rocks, the game will autosave when you exit.

It is still possible to back up your save games and/or start a new game, but at the time of this writing, you must manually copy, move, or delete the save files yourself. See How to start over for instructions.

What is this structure?[edit | edit source]

Hold down the right mouse button over any structure to see more information. This works for Abodes too, displaying how much time before they release a Belief bubble and how many Followers are inside.

What is the green +100 or +40 I sometimes see when clicking on a Follower?[edit | edit source]

Followers that are exploring weaken over time. Gradually, they will begin to move slower, and then sit down, and if left long enough, they die. Clicking on them restores their health. Pay particular attention when having Followers travel a long way to your Totem, as this movement still counts as exploration.

In matches against AIs, you'll restore 40 health per click, while in standard play, each click restores 100 health. If you don't see it, the Follower doesn't need his or her health refreshed.

Followers that are building or repairing Abodes, or which are praying or working on structures or altars do not seem to weaken over time and do not need to be refreshed.

What if I run out of Belief?[edit | edit source]

You can get small amounts of Belief by destroying trees and rocks. Trees generally provide 1 Belief, while rocks may provide between 3 and 5 Belief. Otherwise, you can wait for Belief bubbles to appear above Abodes and then collect it by clicking the Abode. If you unlock the card that gives extra belief for rocks, they'll be worth between 20 and 50 belief.

The most basic Abodes, Shelters and Felt Tents, do not generate Belief. You must first acquire and unlock the Construction card and build the more advanced Abodes this unlocks before you'll begin seeing Belief bubbles appear above them.

Abodes of a higher rank, the larger ones, are capable of generating more belief than the smaller, more primitive ones. The tradeoff is that the Belief bubble becomes available more slowly, but rest assured, they are generating Belief.

Using God powers nearby seems to increase the rate of Belief generation, so it may or may not be worthwhile to try to use a cheap power nearby a large number of Abodes. Setting up a Settlement also helps. Not only do they collect Belief from the nearby Abodes so you don't have to click on each Abode in the area anymore, it makes small amounts of Belief available more quickly.

Note: In the latest version, all abodes generate belief, you'll get 20-25 belief from your small beach abodes.

What does the flag at an Abode mean?[edit | edit source]

How do I get more Gems?[edit | edit source]

During the Expansion Period, you'll acquire a Mining Science Card. Once you've gained enough resources to unlock the card, your Followers will be able to mine Gems from seams on the map. These deposits resemble shining golden leaves on the ground.

You will also get small amounts from some of the matches in the Mount of the Gods event.

What do I do with these chests?[edit | edit source]

If the chest is completely uncovered, just click on it to receive a Resource Card. If you can see only the top, you need to dig down one layer. The most straightforward way to do this is by double right-clicking over it, assuming you have the Smart Sculpting God Card you get automatically upon reaching a population of 10. If the nearby land isn't flat, you'll have to double right-click repeatedly until it finally digs down a layer.

What are those spots with the weird white, blue, and purple blocks that are appearing and disappearing?[edit | edit source]

These indicate the presence of a chest, and usually a buried one. You can dig for these the same way you dig out a chest you can see; you just have to peel away more layers. Note that you can see the telltale blocks through land, but not through trees or rocks.

You acquire Advance Cards in various ways as you advance through the ages, but these cards are locked. You unlock these cards by acquiring enough of the right types of Resource Cards, which then provide certain benefits to your Followers. Unlocking these cards is also how you proceed to the next age.

How do I upgrade or enlarge Abodes?[edit | edit source]

As you unlock various Society and Science cards, your Followers will gain the ability to build more advanced Abodes. Abodes of a higher rank are larger and are built on larger plots, which you create by making larger areas of flat land. There is no way to upgrade existing Abodes, though. You need to destroy the smaller, more primitive ones and, if desired, direct the followers to larger plots. Due to limited capacity of the Totem, this can be a tedious process.

How do I expand my territory?[edit | edit source]

There are various structures on the map which you need to lead Followers to. Some of the smaller stone structures are Shrines of Expansion, which you can identify by holding the right mouse down over them. This also reveals how long it will take for followers to activate the shrine, and also lets you spend Gems to activate it immediately.

Once a shrine has been activated, you'll see a rotating card above it. Simply click on it to acquire a Land Expansion God Card which automatically adds a portion of the map to your territory.

The Mount of the Gods event described can get you more cards. You can also buy more with Gems, but most likely, you'll have to participate in multiplayer matches to get the cards you need. See below for more information.

What is the Mount of the Gods event?[edit | edit source]

This is a series of twenty timed challenges against AI opponents that take place on other instances. These resemble multiplayer matches in that the AI players "talk" to you in a "lobby chat" before the match begins, but you can't respond. The first ten battles are available during the Primitive Age, and the final ten are available during the Bronze Age.

How do I participate in multiplayer?[edit | edit source]

What's underneath the mountain north of the Temple of Fertility?[edit | edit source] 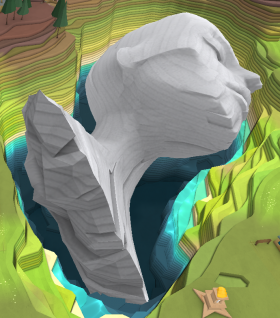 There's a massive stone head buried under the snow cap at the mountain north of the Temple of Fertility. Its purpose is as yet unknown. It may merely be an easter egg. There has been at least report of the head beginning to sink, which is caused by you destroying the land inside the head.

What's with the storms in the Bronze Age?[edit | edit source]

When you get the Bronze Age and unlock the Farming card, thunderstorms will periodically occur in your homeworld. These damage Abodes that aren't within the range of a settlement. To repair them, you'll need to release or guide Followers to them. It is not always possible to release Followers from a damaged abode, even when the flag is up. It is not clear if this is intended or a bug though it may only affect damaged abodes where belief would normally be ready for collection.

What happened to my population counter in the Bronze Age? And how do I start farming?[edit | edit source]

If you unlocked the Farming card, the first Advance Card in the Bronze Age, you no longer acquire Advance Cards by increasing your population. You need to begin farming and collecting Wheat now. To do this, first clear some plots nearby settlements. Then when the settlement's flag is raised, click on it to release a Farmer, a special Follower who plants fields of crops on empty plots and works them. You can continue to release farmers until you have the desired number of fields and the maximum number of Farmers is working each field.

They will only work the fields during the day, and you won't see your Wheat count increase until they harvest the crops and carry them to the nearby settlement.