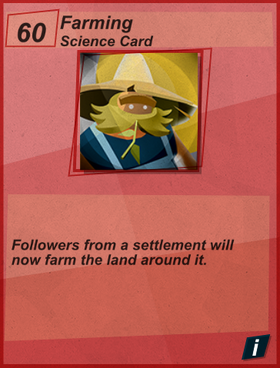 Farming is an Agricultural Period Advance Card that enables farming and the collection of Wheat, necessary to acquire many cards in the Bronze Age.

The card is acquired by having 165 Followers.

Followers from a settlement will now farm the land around it.

How to use:
You can now place Farming Settlements which will allow you to create Farmers. With these farmers you can build farms inside and outside settlements.

Description:
There is evidence of humans farming stretching back over 10,000 years. Farming was an important evolutionary step in human development. Switching from hunter-gathering to cultivating the land allowed humans to have a surplus of food which led to the development of civilization. Early crops ranged from cereal (such as wheat, maize and rice) to Fruit and vegetables (Peas, Squash and Figs).