This page or section refers to content that was removed from the game. 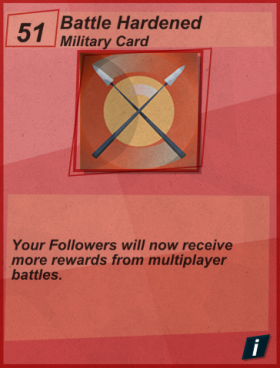 The card is acquired upon winning the tenth battle of the Mount of the Gods event.

Your Followers will now receive more rewards from multiplayer battles.

Description:
Early warfare was often more ritual, designed as a show of courage and masculinity rather than to wipe out an enemy tribe. Warfare of this type is still practiced to this day by some primitive tribes around the world.