The Astari people are the main antagonists to your Followers in the current build of the game (v 2.1). Their village of Astariville is located northeast of your followers starting area.

The Astari are a wild people who frequently have festivals and parties. They worship a large deity who they have constructed a temple for in the middle of their village.

They were created by you in the past.They are destined to destroy you.

In the Game[edit | edit source]

You can take over their land by using the Finger of God or meteors to kill all of their population. Just by simply using Finger of God or Meteor Strikes to tap the trees, it will burn and some of the Astari people will come out and try to put out the fire. If you're lucky, some of them will catch the fire and run wild. If you're lucky also, other Astari villagers will catch the fire and will eventually die. After killing all of the population, the land will be yours to use and sculpt.

If you kill off the Astari while their area is still surrounded by gray you can only affect what's inside their circle and you can not send your people there until you build up all of the beacons between your land and Astariville.

Once you build all of the beacons leading up to Astariville, the game will prompt you to send in one of your own followers into Astariville. When you do this you are able to convert the entire population of Astariville. There will be no more worry about keeping the happiness of your followers above that of the Astaris because all peoples will be your followers.

Their small heads can be seen from behind

The Astari are easily recognized for wearing large masks on their face. They have disproportional blocky bodies and extremely small heads. 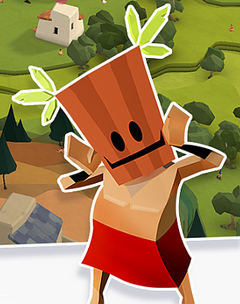 The Astari showing their large mask for the first time on the appstore page of Godus.

The Astari will often show up in your part of the world on the edges of your cities in groups of four and make fun of and mock your followers, but they are easily scared off by sculpting near them.

Astari are also very dexterous and are able to climb up any height of sculpting layers, they are also excellent swimmers and are able to swim across any depth and length of ocean and will not drown like your regular followers.

The Astari have also been updated to send randomly spawning raiding parties to attack your settlement closest to the most recent shrine of expansion. At the moment, these parties consist of archers who will proceed to burn every structure and kill every follower in their area. Defeating the Astari does not stop them from spawning.

Every so often Astari will partake in Festivals. These festivals involve large amounts of Astari coming out of their Abodes to dance and pray around their deity.

Their deity is represented by a statue sitting in criss cross position in the middle of the city pouring a bottle of wine in one hand, while holding a vine of grapes in the other.

However, if your happiness is higher than theirs, then some Astari will join your civilization. After they've joined, you have to leash them, showing them a place where they may build their Abode - Astari won't live in a Followers' Abode.

While joining your civilisation, they aren't working or producing Belief 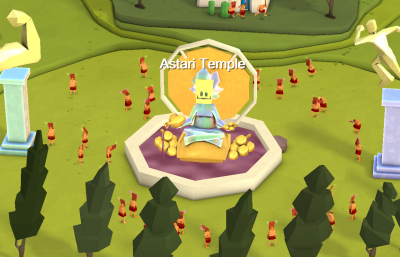 Many Astari gather to sing and dance.

Followers who leave your civilization have their shirt colour change from blue to red, and they also acquire the Astari abilities of swimming and multi-layer climbing.

Any Abodes that had followers in them that converted to Astari will take much longer to fill to capacity than if the abode was being filled under normal circumstances.

Any type of follower can leave your village so don't think that only Builders can abandon your civilization.

These followers can be converted back however if you can raise your happiness above the Astari's at the end of their next festival.

A large group of converted builders, farmers, and breeders arriving at the edge of Astariville

Also, if you convert some Astari to your influence they will make the trip across the mountains and oceans. Although there is a bug that happens if you leash the Astari while inside a place you have no influence they will cause a lot of unhappiness to your civilization and will be stuck on that island. A good tip is to move your Astari followers who have been rendered incapable by your godly influence is to leash them back to Astariville and kill them with the finger of god because they cause so much unhappiness.

The Astari that do make it across the water-mass separating you from the Astari will land on a beach and be homeless thus causing you unhappiness. You can however leash them to an abode plot to make them build a house where they will live and and talk to each other and your followers. Astari houses are noticeable by a various, almost carnival decorations outside their house where a tree would usually be. The Astari followers will not join a settlement, give you belief or even breed until you wipe out all residents of Astariville. Then the Astari act as normal followers and will do everything normal followers do.

In v.2.2.1 3 new Astari settlements were added to Weyworld 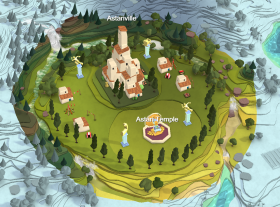 Astariville is located to the north east of the players starting location and is the city in which the Astari reside.

The city contains four Grass Cabins, a Shrine of Capacity, two Shrines of Speed, a Shrine of Stamina, an Astari Temple, and a large Settlement. The starting population of Astariville is 250.

After the Astari population has been reduced to 0, either by converting them or killing them, followers can be sent to populate Astariville, which has a belief capacity of 20 when occupied.

Astariville One is located to the west of the player's starting location. 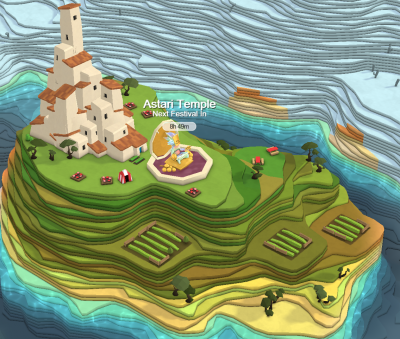 Astariville Two is located to the east of the player's starting location. 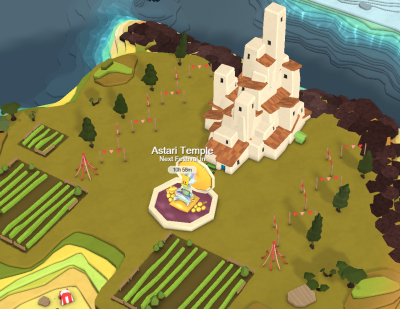 Astariville Maze is located to the north west of the player's starting location.

The city contains three small wheat fields and an Astari Temple. The village contains no Settlement in it however, though there might be Astari farming the wheat fields. The player is able to sculpt land here due to the absence of a Settlement, provided he rid the island of the Astari workers there. 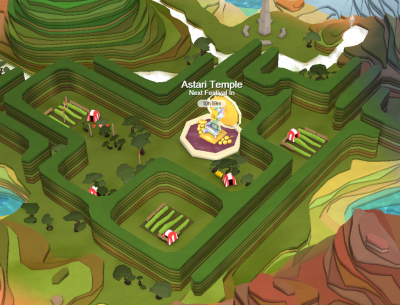